RULES ON ADMISSION INTO THE B.S. MATHEMATICS PROGRAM

New Incoming Freshmen
A new incoming freshman must qualify for admission into U.P. Diliman thru the U.P. College Admission Test (UPCAT) and must make it to the B.S. Mathematics cut-off in Math.
Admission into the program, in any case, shall be dependent on the availability of slots in the program and the current resources of the department.

For Transfer from Within the U.P. System
an accomplished form of Application for Transfer to the College of Science;
a true copy of grades of all subjects enrolled in;
an office referral from his/her College/Unit

For Transfer from Outside the U.P. System
an official copy of grades or transcript of records;
a referral from the U.P. Registrar

The Department of Mathematics shall consider only the applications of students who have satisfied applicable University and College Rules on admission of transfer students.
Admission into the B.S. Mathematics Program is further subject to the following rules.
A U.P. student from other programs or a transfer student from other institutions who has finished at least Math 63 or equivalent may be admitted to the program, provided that
he/she has not incurred a grade of 5.0 in any Math subject and that
he/she has a weighted average of at least 2.0 in all his Math subjects. 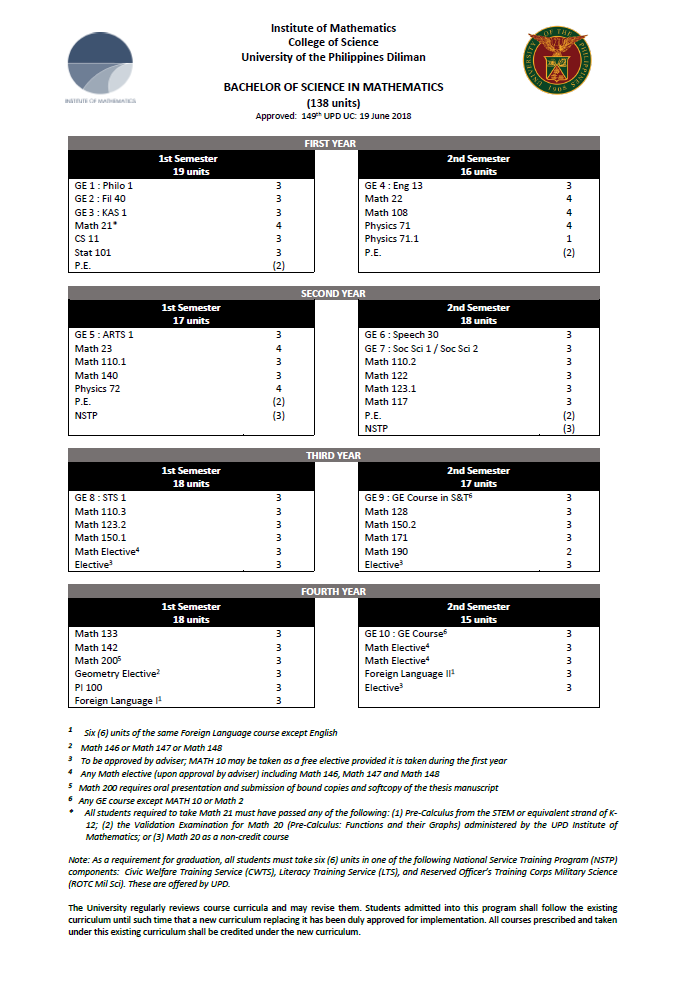 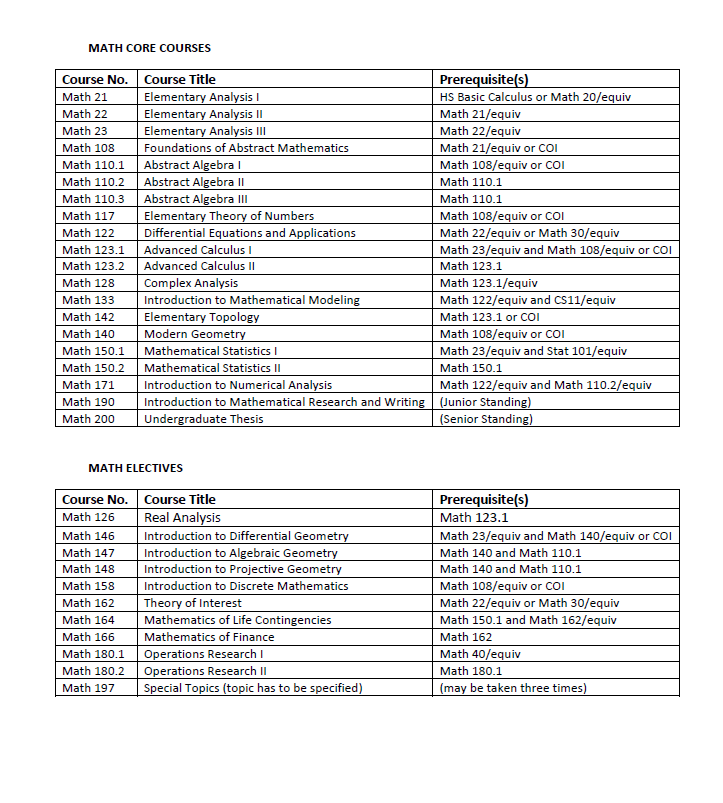 RULES ON DISQUALIFICATION FROM THE B.S. MATHEMATICS PROGRAM

“Inc”. This grade is given if a student, whose class standing throughout the semester is PASSING, fails to take the final examination or fails to complete other requirements for the course, due to illness or other valid reasons. In case the class standing is not passing and the sutdent fails to take the final examination for any reason, a grade of “5.0” is given. Removal of the “Inc” must be done within the prescribed time by passing an examination or meeting all the requirements for the course, after which the student shall be given a final grade based on his overall performance.
Removal of “4.0” or “Inc”
There shall be a regular period for removing grades of “4.0” and “Inc.” before the start of each semester. Such a grade may no longer be improved after the end of the third regular removal period immediately following the semester/term in which the grade was incurred. A grade of “4.0” received after removing a grade of “Inc”, however, must be removed within the remaining portion of the prescribed period for the removal of the original grade of “Inc”

Dropping of Courses
A student may, with the consent of the instructor and the Dean, drop a course by filling out the prescribed UP Form 26 before 3/4 of the hours prescribed for the semester/trimester/quarter term have elapsed, and not later. Any student who drops a course without the approval of the Dean shall have his registration privileges curtailed or entirely withdrawn. If a course is dropped after the middle term, the faculty member concerned shall indicate the date and the class standing of the student at the time of dropping as either “Passing” or “Failing”.

UP Diliman Institute of Mathematics